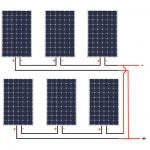 1. String solar system which using A string inverter is connected to a series or “string” of solar panels and converts the power from Direct Current (DC) in to Alternate Current (AC) electricity, for the solar system as a whole. A string inverter will usually be located a short distance away from the array in a sheltered location between the solar array and the switchboard. This is the most common type of inverter used in residential and small / medium commercial systems in Australia.

2. Micro Solar system which using A micro-inverter converts power AT THE solar panel from DC electricity to 240V AC electricity and is attached to each panel in a solar system. Micro-inverters best suit shaded roofs as shade affecting one panel will not affect any other unshaded panels. Micro-inverters are more expensive to install as instead of one central inverter, each panel has its own inverter. With more inverters there are more chances of a failure. Access is difficult so warranty labour costs are high and as warranties are usually parts only the cost is borne by the owner. Inverter do not work well in heated environments. Micro-inverters are positioned in hotter environment on the roof rather than on the shaded side of a house.

3. A central inverter with optimisers system.Like microinverters, power optimisers are small and usually installed at a ratio of one per solar panel. However, unlike micro-inverters, a central inverter is still required to convert the DC electricity from the panels into usable AC electricity.But they still have cost issue and more prone to failure because of their greater numbers and location in harsh rooftop conditions.